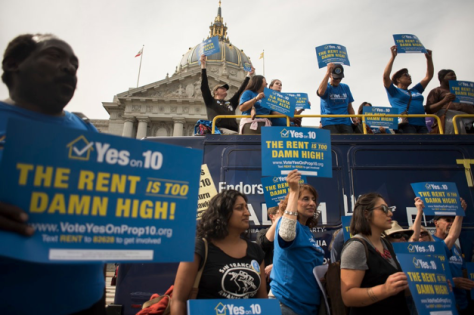 LOS ANGELES — From pulpits across Los Angeles, Pastor Kelvin Sauls has spent the past few months delivering sermons on the spiritual benefits of fasting. The food in the sermon is rent, and landlords need less of it. “My role is to bring a moral perspective to what we are dealing with around the housing crisis,” Pastor Sauls explained.

In addition to a Sunday lesson, this is an Election Day pitch. Pastor Sauls is part of the campaign for Proposition 10, a ballot initiative that would loosen state restraints on local rent control laws. The effort has stoked a battle that has already consumed close to $60 million in political spending, a sizable figure even in a state known for heavily funded campaigns.

Depending on which side is talking, Proposition 10 is either a much-needed tool to help cities solve a housing crisis or a radically misguided idea that will only make things worse. Specifically, it would repeal the Costa-Hawkins Rental Housing Act, which prevents cities from applying rent control laws to single-family homes and apartments built after 1995.

The initiative drive builds on the growing momentum of local efforts to expand tenant protections. “In the midst of the worst housing and homeless crisis that our country has ever seen, how does a bill that restricts local government’s ability to address it go untouched?” asked Damien Goodmon, director of the Yes on 10 campaign, which is primarily funded by the AIDS Healthcare Foundation in Los Angeles.

Proposition 10 has won prominent endorsements from backers including the California Democratic Party and The Los Angeles Times. But opponents have also amassed editorials and broad support, mainly from a coalition of construction unions, nonprofit housing developers and local chambers of commerce.

Among those fighting the initiative is a relatively recent class of landlords — private equity firms like Blackstone Group, which accumulated a vast residential real estate portfolio after the housing market collapse a decade ago. Landlords warn that repealing the Costa-Hawkins law would create deep uncertainty among developers, making California’s housing shortage worse by discouraging construction.

“This is a serious problem, but the solution to that problem should not land solely on the rental housing industry,” said Tom Bannon, president of the California Apartment Association, a landlords’ group.

The California fight reflects a renters’ rights movement that is bubbling up in churches and community centers across the country, a semi-coordinated stand of low-income tenants against the gentrifying American city. Last month in the Roxbury section of Boston, about 300 people gathered for an afternoon assembly on how to blunt evictions and economic displacement. The event offered free child care and had organizers speaking English, Spanish and Cantonese.