Elsewhere, Paul Feig’s ‘A Simple Favor’ is coming in ahead of expectations, while Matthew McConaughey’s crime-drama ‘White Boy Rick’ may not hit $10 million in its launch. 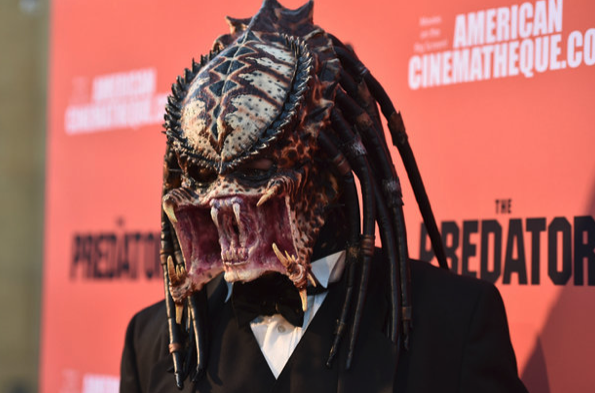 Shane Black’s The Predator preyed on the competition at the Friday box office, earning $10.5 million from 4,037 theaters for a projected $25 million weekend debut.

The reboot, from Fox, may be coming in behind expectations, but it won’t have any trouble dethroning holdover The Nun, which is tumbling more than 65 percent in its second weekend to a projected $18.5 million. (The Nun is still a win for New Line and Warner Bros., considering its modest $22 million budget, and will finish Sunday with a domestic total of roughly $85 million.)

Box-office observers don’t believe that the male-fueled film is being hurt by the controversy that erupted last week when word broke that Fox cut a scene after Munn informed the studio that an actor and acquaintance of Black’s with a small role in the movie, Steven Wilder Striegel, was a registered sex offender.

Critics haven’t been kind to the film, while audiences gave it a lowly C+ CinemaScore (two of the previous films in the series likewise earned some variation of a C grade).

Elsewhere, Paul Feig’s new neo-noir-comedy A Simple Favor is doing better business than expected, grossing an estimated $6 million on Friday from 3,102 theaters for a projected $16 million-plus debut. Starring Anna Kendrick, Blake Lively and Henry Golding of Crazy Rich Asians fame, the Lionsgate release is a marked departure for Feig, the filmmaker behind such comedic romps as Bridesmaids.

A dark tale about toxic friendships and the underside of suburbia, Simple Favor, earning a B+ CinemaScore, follows a mommy vlogger (Kendrick) who tries to uncover the truth behind the disappearance of her best friend (Lively) with the help of her BFF’s husband (Golding). What emerges is a tale of betrayal, secrets, revelations, love, loyalty, revenge and murder.

Matthew McConaughey is also gracing the big screen this weekend in filmmaker Yann Demange’s White Boy Rick. From Jeff Robinov’s Studio 8, the crime drama earned $3.5 million on Friday for a projected debut of $9.2 million. The awards hopeful received a mediocre B CinemaScore.

Set in 1980s Detroit at the height of the crack cocaine epidemic, White Boy Rick is based on the real-life story of the teenage son of a blue-collar father who became an undercover police informant and later a drug dealer before being abandoned by his handlers and sentenced to life in prison. Newcomer Richie Merritt stars opposite McConaughey.

The weekend’s other new pic, the faith-based Unbroken: A Path to Redemption is struggling to hit $3 million in its debut, despite being the only one of the four new films to be graced with an A CinemaScore. Playing in 1,602 locations, the movie is a “spiritual” successor, or sequel, to Angelina Jolie and Universal’s Unbroken. This time out, faith-based distributor Pure Flix is in charge of the film’s release.

Path to Redemption draws from the second half of Laura Hillenbrand’s best-selling book Unbroken and recounts what happened when Louis Zamperini (Samuel Hunt) returned home after surviving 47 days on a life raft only to be captured and tortured for two years at a Japanese POW camp. The pic chronicles Zamperini’s conversion to evangelical Christianity — which saves his marriage — after attending a Billy Graham revival. Will Graham portrays his late minister grandfather in the movie.