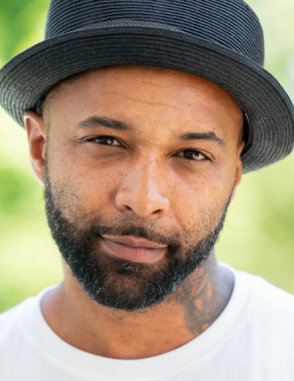 This wasn’t how Joe Budden planned on becoming famous. In fact, he didn’t plan much of anything. Now he’s on the charts, but not for his music.

Instead, as of Thursday, Joe Budden has the No. 1 podcast on the iTunes music podcast chart — five slots ahead of the NPR standard-bearer “All Songs Considered.” The Joe Budden Podcast With Rory and Mal is produced at a friend’s house in Queens.

Mr. Budden had a brief taste of mainstream success as a rapper with a Top 40 hit in 2003 before his career stalled. Now he has become a kind of volatile elder statesman of hip-hop, holding forth on his podcast, social media and YouTube before an audience of millions. His soliloquies and tirades, whether a careful examination of a rap diss or a nuanced defense of XXXTentacion, the controversial young rapper who was murdered in June, lend him a credibility he never quite had as an artist.

Mr. Budden is now banking on a new partnership with Spotify to expand on his success. Starting this fall, his podcast will stream exclusively on that platform. (He plans on still uploading videos of the show on YouTube.) The goal, according to Courtney Holt, head of studios and video at Spotify, is to “develop out not just this show, but other shows in the future.” When asked why he thought Spotify was the best home for his show, Mr. Budden said simply, “They weren’t afraid of me.”

Seated at the dining room table in his Montclair, N.J., home, Mr. Budden is just as he seems as a podcast host: expressive and candid and unembarrassed to recount a series of personal and professional misfortunes and poor decisions, from his battles with addiction, messy physical fights that spilled onto social media to rap beefs and shady recording contracts that left him broke for most of his rap career.

He was also accused of beating an ex-girlfriend, and even though charges were dropped, the allegations continue to dog him. “Even if you’re innocent of those things, therapy teaches you to always pay attention to the part that I played in things,” Mr. Budden said. “I didn’t do any of that stuff, but how did I get here? I frequented strip clubs, I popped pills. My life was in disarray. It made me say, ‘No more.’”