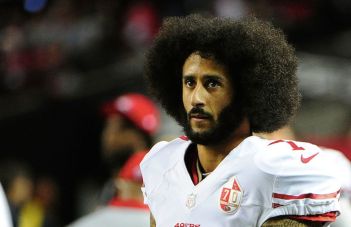 It seems EA Sports made a controversial edit to YG’s “Big Bank” single.According to Pro Football Talk, the track will appear in the upcoming Madden NFL 19 video game with some noticeable omissions. EA Sports has reportedly censored the record’s profanity, racial slurs, drug references, as well as Colin Kaepernick’s name. No, really.

The former 49ers quarterback is given a shout-out in Big Sean’s original verse: “Feed me to the wolves, now I lead the pack and shit. You boys all cap, I’m more Colin Kaepernick;” however, a Twitter user has pointed out that the athlete’s name has been scrubbed from the Madden 19 soundtrack.

EA Sports has not publicly addressed the censored line, but it’s hard to believe that the edit was a mistake. Pro Football Talk questioned why “Big Bank”—featuring Sean, 2 Chainz, and Nicki Minaj—was even used in the first place, considering the ongoing legal battle between Kaepernick and the NFL.

As many of you know, the 30-year-old free agent has accused the league, coaches, and owners of colluding against him, following his on-field protest against police brutality. Kaepernick claims various team owners have refused to sign him strictly because of his demonstrations. He remains unemployed.According to Pro Football Talk, Kaepernick was also edited out of the Madden 18 soundtrack. His name was also taken out of Mike Will Made-It’s “Bars of Soap” featuring Swae Lee.