“I embraced what I thought people was gonna hate about me. I was gonna turn the hate into love” 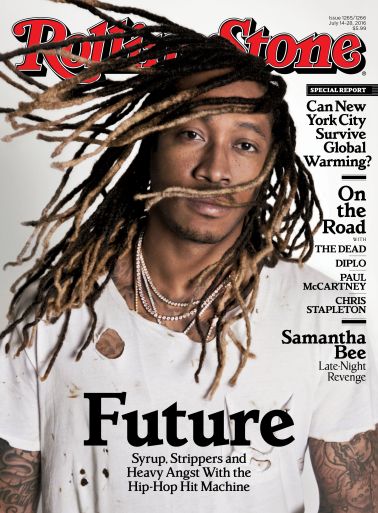 Outside, it’s rush hour, a still-sunny spring evening in Atlanta, but in here, you’d never know it. This room is windowless and dark, illuminated only by a projector shooting shimmering green stars onto the ceiling, a computer monitor displaying Pro Tools, and the glowing rack of gear beneath it. The air seems composed mostly of high-grade kush smoke, accompanied by just enough oxygen to sustain life. On a shelf in the corner are liter bottles of sugary sodas – Sprite, Pineapple Sunkist, Strawberry Fanta – mixers for a bottle of codeine cough syrup adorned with a picture of Homer Simpson.

This control room and its adjoining vocal booth, in a gated studio complex on an industrial road a couple of miles from downtown, is the workplace of choice for Atlanta’s reigning hip-hop king, Future. Six feet three with long, blond-tipped dreads, top-notch cheekbones and the sleepy swagger of the high school athlete he once was, he looks less like an actual rapper than a movie star cast as one. Even leaked mug shots from his pre-fame hustling days look like outtakes from magazine shoots. He has a big, bright leading-man smile that he holds in reserve, unleashing it most consistently in the presence of attractive women. 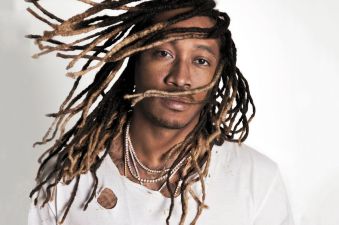 He’s puffing on a blunt, taking a sip or two from a Styrofoam cup of the narcotic beverage mostly known to hip-hop fans as “lean” or “drank” or “sizzurp” before he helped rebrand it as “dirty Sprite.” With his lyrical salutes to Xanax, codeine, Adderall and Oxycontin, he’s one of the first rappers who could conceivably sign a sponsorship deal with Big Pharma: “I just took a piss and I seen codeine coming out,” he rapped not long ago. He considers himself a rock star, and he’s dressed like one: pale jeans, strategically shredded, with a plaid shirt tied at his waist and a crisp white tee. (The following day, he wears a $435 T-shirt by the high-end brand Enfants Riches Déprimés, emblazoned with the words “high risk/children without a conscience.”)