The path to discovering your true passion is rarely an easy road. Case in point: up-and-coming actor, dancer and musical artist Alvester. Before the African-American born performer realized his keen interest for the performing arts, Alvester says he is still a little boy at heart, to his detriment he says at times. But he is definitely self-assured. “It’s not a false self-assurance, not wrapped in arrogance, and cockiness”, it’s actually wrapped in humility and a calmness. He says he knows things are going to happen and it’s God centered. “I believe in myself and I have no self-doubt.” 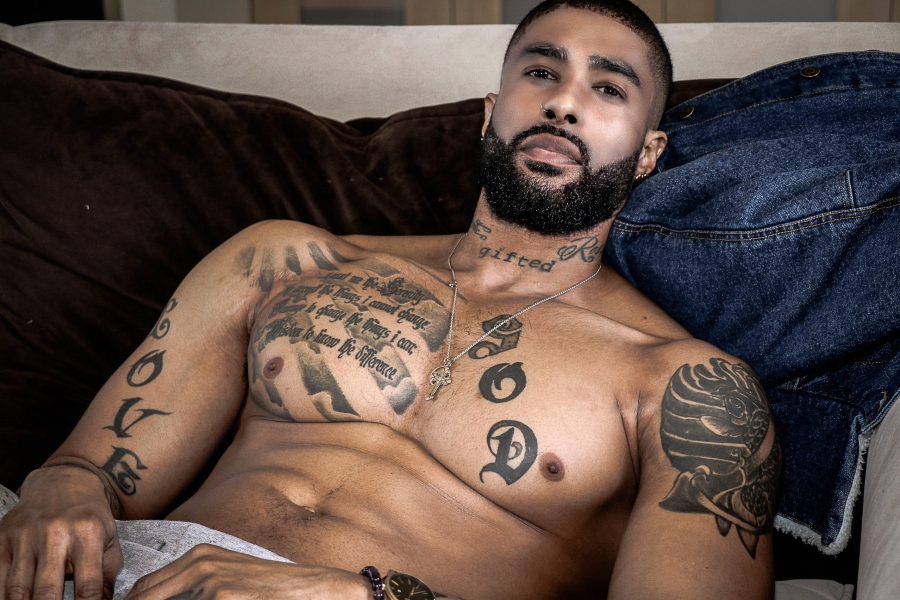 AM: Alvester Martin is still a little boy at heart, almost to his own detriment at times. At this point in his career and his life, he says he is definitely self-assured.

SDM: How do you feel about doing interviews

AM: I have done a lot of interviews, with so much stuff coming out, he feels like he has a cult following and people don’t really want know who Alvester is. They see past things he has done, like pictures, his Instagram feed, social media posts, and they assume so many things. He says, with great expression, I am totally the opposite of what is depicted in social media.

SDM: How did you get started in the entertainment business

AM: When we first spoke to on the phone about the shoot and we talked about what I wanted, the photographer was surprised me by saying I wanted something basic, and not the “pretty boy” thing.

SDM:Even though he is a pretty boy.

AM: I have been groomed since the age of 5, and have been trained in acting, singing, dancing etc. I feel it’s a gift and a curse. Now that social media is the norm, your judged on who people think you are, and rest on the fact that you are good looking and literally, want to be paid for looking good. However I want people to know that I have much more to offer, than my good looks. When I audition and books gigs, people are so surprised, that I have talent. He says he literally has people contacting him through his social media, and once they have connected they are astonished that he is well spoken. Alvester says he is sometimes bewildered, annoyed and frustrated. Because today’s values place so much emphasis on the looks of person as opposed to their metal. They write you off, before they even find out who you are.

SDM: How did you get involved with Black Magic

AM: I feel, society, the casting directors, and the gatekeepers in the industry have said to him when he walks into a room, “Oh I didn’t think you were going to be that good.” It used to bother me! Alvester says and subsequently, he went through a 4-year depression. “I hated doing Black Magic, I felt they mislead me in the pitch and the script”. I thought it was going be great exposure for me and an excellent opportunity to showcase my skills. They knew him as a background dancer for Beyoncé as his body of work to this point. “I felt the transition had already been hard enough to transcend the title of just a dancer, as well as the financial toll, my artistry took a hit, and my Psyche.” I began to turn down jobs, although I needed to eat. “I feel currently there is already a lack of respect in Hollywood, for dancers generally, however I pressed on.” Ultimately, the show was re-pitched and presented again, it took a few times before I said yes! Once the final pitch was presented, I felt that this was going to be a great opportunity to move away from being a background dancer to a recording artist, which was always in the forefront of his journey, In his mind there was always his mindset that he didn’t move to LA to be a background dancer, although he is grateful for what he has done its just he wanted more!

“I went into a deep depression once again and felt I had hit rock bottom and committed career suicide. I had worked years and his parents had sacrificed their monies, and time to get me my training and go forward.”

During the filming, it became quite apparent that it was not what he signed up for. The show was about being a stripper, which wasn’t his world. People connected with the show who were on the show were making him feel bad for having worked so many years in the industry and having a standard of expertise. As a result of this experience I went into a deep depression once again and felt he had hit rock bottom and committed career suicide. He had worked years and years and his parents have sacrificed their monies, and time to for my training so I could go forward.

SDM: What is your mindset today and what are your future goals

AM: In final, I’m in a whole different place, I have new music, it’s moodier, and it has an edge its more me. It’s what I like, how I feel, and what I think. My music is my diary in life, I accept my acting career now, I hate slashes, I can sing alone and rest on that, I can act alone, and I can dance alone. It is a blessing to be able to stand on my two feet. My actor career is taking off and its great, I have self-discovery and at this point I feel I am walking into the unknown but in a positive way, and its OK to not always feel OK and be OK, but whatever I feel I put that shit in my work and art.

“My acting career is taking off and its great, I have self-discovery and at this point I feel I am is walking into the unknown but in a positive way, and its OK to not always feel OK and be OK, but whatever you feel and whatever I feel put that shit in your work and art.”