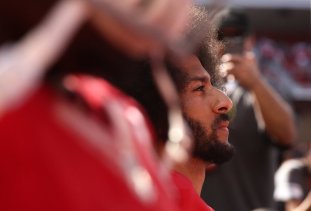 Given the fiery responses to Colin Kaepernick’s protest during the national anthem — taking a knee, a gesture now being adopted by a wave of professional athletes — you would think that it was a militant motion, full of anger and menace, akin to the Black Power salutes raised by Tommie Smith and John Carlos at the 1968 Olympics. But kneeling during the national anthem is a gesture of humility, not ominous ire.

In youth sports, players take a knee when another player is hurt. It is an acknowledgment of the vulnerable humanity that, for the moment, has been obscured by the intense competition of the game. Taking a knee in that context is, like a religious genuflection, a gesture of self-surrender before the greater reality of human suffering.

Likewise, when black players take a knee during the national anthem to protest police violence against African-Americans, they are making a gesture of pain and distress. They are putting America in a more honest context — our “Star-Spangled Banner” dimly seen through the mists of deep injury. It is like flying an American flag upside down in a moment of emergency.

Still, black players kneeling in this way has a disorienting quality. Clearly, however humble and sincere Kaepernick’s intentions, his critics have decided that he is disrespecting a growing list of American institutions: the flag, fallen service members — even the perceived line between playing professional sports and speaking out on issues of national importance.