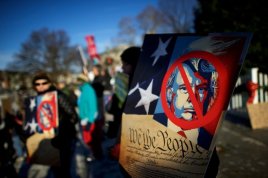 Since Donald Trump’s cataclysmic election, the unthinkable has become ordinary. We’ve grown used to naked profiteering off the presidency, an administration that calls for the firing of private citizens for political dissent and nuclear diplomacy conducted via Twitter taunts. Here, in my debut as a New York Times columnist, I want to discuss a structural problem that both underlies and transcends our current political nightmare: We have entered a period of minority rule.

I don’t just mean the fact that Trump became president despite his decisive loss in the popular vote, though that shouldn’t be forgotten. Worse, the majority of voters who disapprove of Trump have little power to force Congress to curb him.

A combination of gerrymandering and the tight clustering of Democrats in urban areas means that even if Democrats get significantly more overall votes than Republicans in the midterms — which polls show is probable — they may not take back the House of Representatives. (According to a Brookings Institution analysis, in 2016, Republicans won 55.2 percent of seats with just under 50 percent of votes cast for Congress.)

And because of the quirks of the 2018 Senate map, Democrats are extremely unlikely to reclaim that chamber, even if most voters would prefer Democratic control. Some analysts have even suggested that Republicans could emerge from 2018 with a filibuster-proof 60-seat majority.

Our Constitution has always had a small-state bias, but the effects have become more pronounced as the population discrepancy between the smallest states and the largest states has grown. “Given contemporary demography, a little bit less than 50 percent of the country lives in 40 of the 50 states,” Sanford Levinson, a constitutional law scholar at the University of Texas, told me. “Roughly half the country gets 80 percent of the votes in the Senate, and the other half of the country gets 20 percent.”