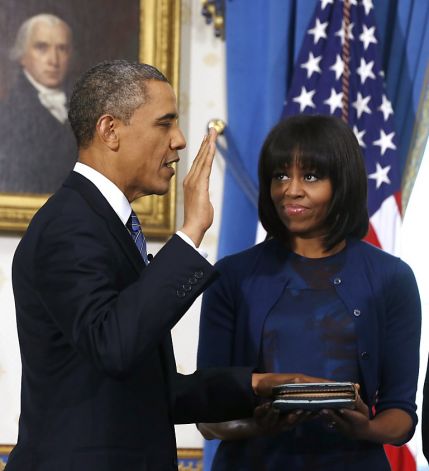 WASHINGTON (AP) — President Barack Obama was sworn in for four more years Sunday in a simple ceremony at the White House, embarking on a second-term quest to restore a still-shaky economy and combat terrorists overseas while swearing an age-old oath to “preserve, protect and defend” the Constitution. “I did it,” a smiling president said to his daughter Sasha seconds after following Chief Justice John Roberts in reciting the oath of office. First lady Michelle Obama and the couple’s other daughter, Malia, were among relatives who bore witness.

The quiet moments were prelude to Monday’s public inaugural events, when Obama and Vice President Joe Biden will be sworn in on the steps of the U.S. Capitol before a crowd expected to reach into the hundreds of thousands and a television audience counted in the millions. The trappings were in place — the flag-draped stands ready outside the Capitol and the tables set inside for a traditional lunch with lawmakers. Across town, a specially made reviewing stand rested outside the White House gates for the president and guests to watch the traditional parade down Pennsylvania Avenue.

A crowd of perhaps 800,000 was forecast, less than the million-plus that thronged to the nation’s capital four years ago to witness the inauguration of the first black president in American history. The weather forecast was encouraging, to a point. High temperatures were predicted for the lower 40s during the day, with scattered snow showers during the evening, when two inaugural balls close out the official proceedings.The 44th chief executive is only the 17th to win re-election, and his second-term goals are ambitious for a country where sharp political differences have produced gridlocked government in recent years. Restoration of the economy to full strength and pressing the worldwide campaign against terrorists sit atop the agenda. He also wants to reduce federal deficits and win immigration and gun control legislation from Congress, where Republicans control the House.

At a reception Sunday night, Obama told supporters the inauguration is a celebration of “this incredible nation that we call home,” not the election results. “Let’s make sure to work as hard as we can to pass on an America that is worthy not only of our past but also of our future,” he said.

If Obama needed a reminder of the challenges he faces, he got one from half-way around the globe. An Algerian security official disclosed the discovery of 25 additional bodies at a gas plant where radical Islamists last week took dozens of foreign workers hostage. In Washington, tourists strolled leisurely on an unseasonably warm day. “I’m very proud of him and what he’s trying to do for immigration, women’s rights, what they call ‘Obamacare,’ and concerns for the middle class,” said Patricia Merritt, a retired educator from San Antonio, in town with her daughter and granddaughter to see the inauguration and parade as well as historic sites. “I think he’s more disrespected than any other president,” she added, referring to his critics.