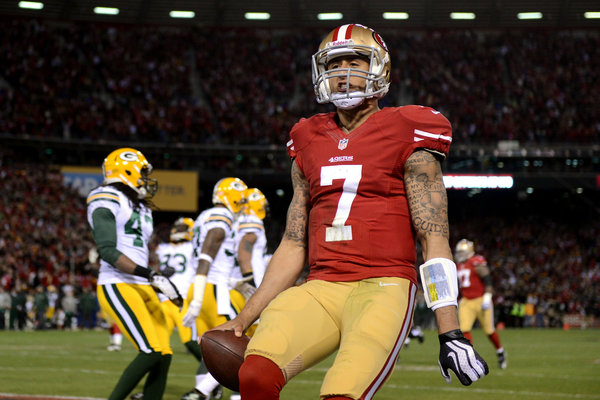 SAN FRANCISCO — There were 22 players on the field, dozens more on the sideline, 69,732 fans at Candlestick Park and millions watching from home. For much of Saturday night’s playoff game between the San Francisco 49ers and the Green Bay Packers, it seemed as if they all revolved around a single, budding, shining star: Colin Kaepernick. Kaepernick, justifying November’s decision by San Francisco Coach Jim Harbaugh to hand the team’s championship aspirations to an untested, strong-armed second-year quarterback, dominated the field with long scrambles and pinpoint throws. He kept the Packers’ defense as off-balance as a slowing top, set records and outplayed the reigning N.F.L. most valuable player, Aaron Rodgers. And on a cool, clear evening that may stand as the coming-out party for San Francisco’s next great quarterback, he led the 49ers to a 45-31 victory and a spot in the N.F.C. championship game. “Just a guy playing football,” 49ers wide receiver Michael Crabtree said of Kaepernick. “Man, he’s making it happen — with his feet, his arm, making plays. He’s a playmaker.” The 49ers will either play the Falcons in Atlanta or face the division-rival Seattle Seahawks at Candlestick Park next Sunday, for a spot in the Super Bowl.

There will be two Harbaughs coaching for a Super Bowl berth. John Harbaugh, Jim’s older brother, is head coach of the Baltimore Ravens, who beat the Denver Broncos in overtime earlier on Saturday. The Ravens will play in the A.F.C. championship game against either New England or Houston. Saturday’s games overlapped; Jim Harbaugh received word of his brother’s success through the coaching headset in the first quarter. By then, it was clear that San Francisco’s chances were in the hands of Kaepernick. He completed 17 of 31 passes for 263 yards, with two touchdowns to Crabtree in the second quarter and an early interception that was returned for a touchdown to open the game’s scoring.