Is This the End of Stop and Frisk? 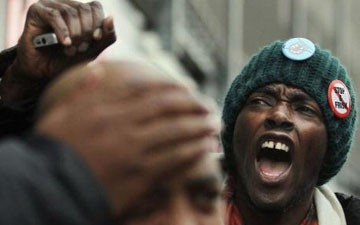 New York City’s stop-and-frisk program has exploded by 600 percent under Mayor Michael Bloomberg — garnering outrage from critics who believe that the practice forces Black and Latino residents to live under a separate-and-unequal police state, subject to random violations of their Fourth Amendment constitutional right against unreasonable search and seizure. Though originally intended to curb gun violence, the program has become carte blanche for New York Police Department officers to racially profile young males in predominantly Black and Latino neighborhoods. With the help of the New York Civil Liberties Union, city residents sued the NYPD — seeking justice from those sworn to protect and defend them. In a case specifically focused on the Trespass Affidavit Program, or TAP, which allowed officers to stop and question residents both inside and outside private property (in residences dubbed “clean halls” buildings), plaintiffs argued that the NYPD “has a widespread practice of making unlawful stops on suspicion of trespass.” The lead plaintiff, Jaenean Ligon, filed suit after her 17-year-old son was stopped for no reason outside his apartment building during a trip to the store to purchase ketchup. Yes, ketchup. This week, U.S. District Judge Shira Scheindlin issued an injunction prohibiting NYPD officers from engaging in stop and frisk outside buildings designated by TAP. The facts of the case reveal that patrolling officers never differentiated between potential criminals and citizens. Black and Latino residents were stopped on suspicion of being Black and Latino alone. In addition to Ligon, other plaintiffs included Charles Bradley, a 51-year-old African-American security guard, who was arrested while visiting his fiancee in the Bronx. Bradley was stopped, frisked, transported to a police station, strip-searched and fingerprinted — all while being asked questions about his potential involvement with guns and drugs.

Read it at The Root.