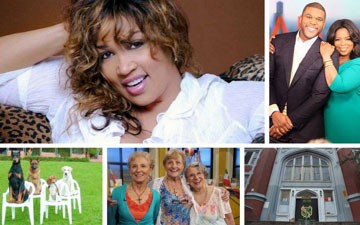 2012 was a great year for the Oprah Winfrey Network. OWN, which once suffered from low ratings and management shake-ups, reached double-digit gains and soared with 11 months of consecutive ratings growth. The 2013 season looks just as bright for OWN. Over the weekend, the network revealed six new original series to its lineup. The shows include Raising Whitley, a reality series centered around the life of actress and comedienne Kym Whitley; Blackboard Wars, a docu-series about the transformation of New Orleans’ John McDonogh High School; Dogfellas, a show following dog groomer James “Head” Guiliani and Golden Sisters, a reality show starring real-life golden girls Mary, Josie & Teresa. The lineup also includes two scripted series from OWN’s joint venture with Tyler Perry. The Have and the Have Nots and Love Thy Neighbor are both scheduled to air on May 29th.

The network has yet to release premiere dates for its new reality series, but until then, Oprah fans can look forward to seeing some familiar faces on her other hit shows. Oprahs’ Master Class is scheduled to return with appearances from Alicia Keys, Lenny Kravitz, Diahann Carroll and Berry Gordy. Oprah’s Next Chapter is set to star Cissy Houston and LL Cool J in upcoming episodes, and in March, Oprah: Where Are They Now? will show the whereabouts of former The Oprah Winfrey Show guests Bow Wow, Omarosa and Dennis Rodman.

Read it at Clutch.