While Kindle Fire, Galaxy Tab and Nexus tablet sales continue to rise, most tablet Web surfing is still coming from Apple devices. Roughly 87 percent of tablet Web surfing comes from an iPad, according to the latest numbers from mobile ad company Chitika. That’s down just 1 percent from the ad network’s November survey. A few rivals did show some impressive gains, however. Kindle Fire models accounted for 4.25 percent of all tablet Web traffic, up 20 percent from the prior survey. The Samsung Galaxy family posted a slight gain, to 2.65 percent, while Google Nexus tablets increased from 0.91 percent to 1.06 percent in December. It will be interesting to see if the numbers change at all once all those holiday presents are unwrapped and activated. 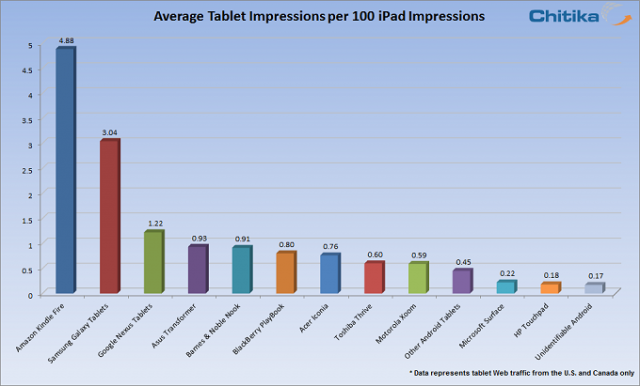 One thought on “Despite Gains by Amazon, Samsung and Google, Vast Majority of Tablet Web Visits Still Coming From iPads”