Surmounting Struggles In Life and Onstage 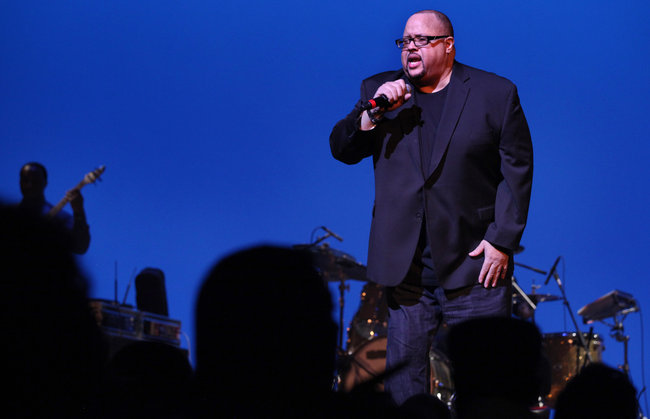 NEWARK — Fred Hammond walked onstage after a technical delay: a big man in jeans, a dark blazer and rectangular glasses moving uncharismatically, stiffly, maybe wearily. A small band — two keyboardists, a bassist and a drummer — formed a crescent at some distance from him, and he stood alone at center stage. No choir or backup singers, no guitar player, and he wasn’t playing bass, an instrument he’s been associated with since he played backup with the gospel group the Winans in the early 1980s; as an equal member of the ensemble Commissioned later that decade, when he was helping to reshape gospel music along modern black-pop lines; and on his own records, sometimes with the choir Radical for Christ, in the ’90s and beyond. Would he carry this concert? The charisma came out in other ways. The show, Friday night at the New Jersey Performing Arts Center here, which began with a set from the A-Zamar choir from Rahway, N.J., became a fascinating example of what precision bandleading, narrative connectivity, musical intelligence, improvisation, spiritual grace and the power of the voice can do when the body has limitations. Mr. Hammond, who turns 52 on Thursday, has a temperate tenor voice and uses it as an instrument, ornamenting melodies all over the place. He doesn’t grandstand much; he only exhorts five people in the audience at a time, knowing that hundreds more will comply. He rarely shouts except when he preaches, or to kick off a song. (“A flat!” he’d command; the band would play on the chord, and he’d start singing, letting the band catch up.) His high register isn’t quite a falsetto; it’s even and humble, a tonal shift in tense moments. CONTINUE READING