Artists on The Verge 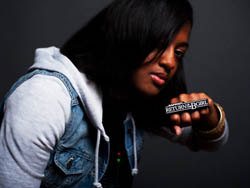 In this era of Hip-Hop, where the Hip-Hop blogosphere is brimming with articles about the shit that Chief Keef does or does not like, videos of DMX’s surprisingly accurate covers of Christmas carols, and analysis of the twitter beef between 50 Cent and French Montana, it seems almost refreshing when an artist emerges with no other motive than to make good music. No ulterior motives, no gimmicks, just good Hip-Hop. I think that Phonte might have said it best on the Little Brother song Not Enough, rapping “When we’re on stage, the people they all front / dope beats, dope rhymes, what more do y’all want?” Sadly, it seems that the answer to this question is ‘lots.’ With the rare exceptions of dudes like Kendrick Lamar, Big Krit, or Joey Bada$$, the masses rarely seem to give people a chance until there’s a video of them on WorldStar snatching someone’s chain, or unless they have some other gimmick to attach their brand to. Juxtaposed against this subculture of ironic appreciation, the rise of rapper Rapsody, a contemporary to these aforementioned artists, seems particularly interesting. Similar to Little Brother, Rapsody, whose love for Hip-Hop culture is anything but ironic, is a North Carolina native whose career and sound have been heavily shaped by legendary producer 9th Wonder. This love of the culture is apparent just one minute into her album The Idea of Beautiful. “I care about ‘em too much to not say nothin” Rapsody says on the song “Motivation,” an undertone of urgency in her voice. Beginning with a beautifully honest spoken word piece, the song’s lush soundscape sets the tone for the rest of the album. True to the 9th Wonder influence, the album is filled with soulful, boom-bap beats; a callback to better times yet somehow still wholly modern. When I spoke to Rapsody on the phone earlier today, she explained “I grew up heavily influenced by that 90s era and a lot of that was boom-bap. I was a big fan of people like Mos Def, The Fugees, Little Brother, and that whole sound.  I like a wide range of beats, but the soulful beats really, really do something for me. They inspire me more. You can’t beat the soul.” When examining Rapsody’s lyrical content, these influences become rather apparent. Drawing on the lyrical dexterity of a dude like Mos Def, she often raps with the sincerity of a Big Pooh, incorporating an undercurrent of consciousness similar to that of Lauryn Hill’s. Rapsody is no slouch on the mic. CONTINUE READING

Categories: Artists on The Verge