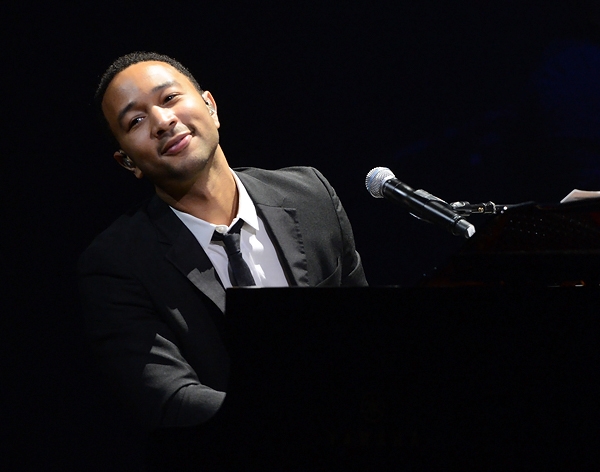 John Legend was holed up in a London recording studio with Paul Epworth, at work on his next album (due in May), when he was inspired to pen a song for Quentin Tarantino’s Django Unchained soundtrack. “I had been reading about the film, very early on when it was in development, and I knew I wanted to write something for it,” Legend told Rolling Stone. “But he didn’t ask me to write it. Still, Django‘s soundtrack is the first time Tarantino has collaborated with artists to produce original songs for a film. The list includes tracks by Jamie Foxx and Rick Ross, Anthony Hamilton and Elayna Boynton, Ennio Morricone and Elisa, and a James Brown and Tupac mashup, plus a smattering of archive-dives (like one from Jim Croce) that come from the director’s own collection, complete with pops and scratches.

“When word got out what the movie was about, we discovered that it was actually inspiring artists to write songs with soul that underscored the love story and the revenge story,” Django‘s music supervisor, Mary Ramos, said by email. Foxx brought Ross to the set to write “100 Coffins,” Hamilton and Boynton were inspired by the trailers, and Ramos’ crew dug through the Tupac vaults and teamed up with the James Brown estate to produce a new song. Frank Ocean even wrote what Tarantino called “a fantastic ballad,” but it didn’t work with the film’s final cut. “There just wasn’t a scene where it could be really featured,” Ramos said. “Quentin didn’t want to cheapen the song by just shoehorning it in, and wouldn’t use it unless it could be really be heard, and used effectively to really amplify the emotional content of a scene.”

In Legend’s sweaty, soulful “Who Did That to You,” hardcore R&B fans will recognize the grimy, funky lead-in from the Mighty Hannibal’s 1967 single “The Right to Love You.” “The samples and different musical elements that Paul was bringing in, it just felt like we were in a creative space to create something that would be cool for Quentin,” Legend said. “The sample had some of the flavor of the kind of music that I associate with Tarantino movies. It’s really cool, it’s almost campy, and it’s got a sort of vintage to it.”