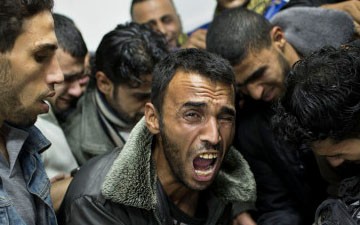 The Palestinian civilian death toll mounted Monday as Israeli aircraft struck densely populated areas in the Gaza Strip in a campaign to quell militant rocket fire menacing nearly half of Israel’s population. An overnight airstrike on two houses belonging to an extended clan in Gaza City killed two children and two adults, and injured 42 people, said Gaza heath official Ashraf al-Kidra. Shortly after, Israeli aircraft bombarded the remains of the former national security compound in Gaza City. Flying shrapnel killed one child and wounded others living nearby, al-Kidra said. Five farmers were killed in two separate strikes, al-Kidra said, including three who had been identified earlier by Hamas security officials as Islamic Jihad fighters. Civilian casualties began to shoot up on Sunday, after Israel said it was stepping up attacks on the homes of suspected Hamas activists. After that warning, an Israeli missile flatted a two-story house in a residential area of Gaza City, killing at least 11 civilians, most of them women and children. It remained unclear who the target of that missile attack was. However, the new tactic ushered in a new and risky phase of the operation, given the likelihood of civilian casualties in the crowded territory of 1.6 millionPalestinians. The rising civilian toll was also likely to intensify pressure on Israel to end the fighting. Hundreds of civilian casualties in an Israeli offensive in Gaza four years ago led to fierce international condemnation of Israel. In all, 87 Palestinians, including 50 civilians, have been killed in the six-day onslaught and 720 have been wounded.