100 Greatest Hip-Hip Beats of All Time 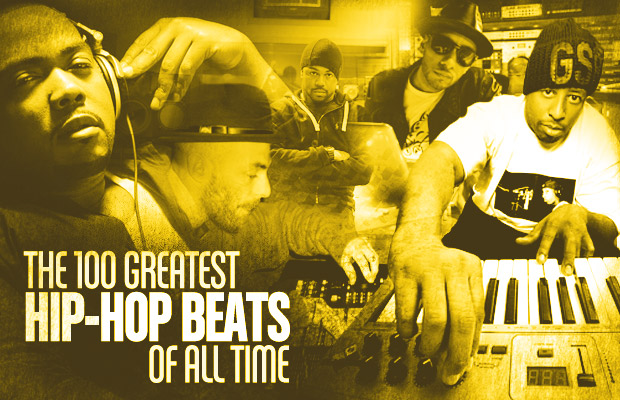 Beats, Rhymes and Life: The name the famous A Tribe Called Quest album. The reason “beats” comes first? Production. It’s arguably the most important element of hip-hop. It’s the cornerstone of every song, the foundation lyrics are built upon. They dictate the time-signature, the tempo, the tone of the lyrics. They’re at the beginning and the end of the creative process that goes into each of these songs. One of the biggest challenges in writing a list of the best beats of all time? The genre’s soundscape is so wide-ranging and incredibly diverse that it creates some difficult calculation issues to work through. For example: How do you rank the disco instrumentals of early hip-hop with the layered samples and filtered bass lines of golden-era New York rap? How do you rank Too $hort‘s trunk-rattling bass against Swizz Beatz‘s erratic Triton keyboard swipes? There are unlimited measuring sticks by which production can be compared. Consider the clattering, found-sound effects of DJ Premier‘s best mid-90s beats, or the raw, drum machine-oriented backdrops of ’80s rap, designed to shock the system. How do you weigh those against, say, a lush vintage loop from The Hitmen or a crossover pop smash from Timbaland?

It can be broken down even further: Is the bigger, more-popular song the better beat? Or is it the underground smash that influenced the mainstream? Is it the track that best epitomizes an era, or is it the one that pushed the edge? To qualify the best beats, do we look at production that stands out apart from the verses and the hook, or is it the beat that complements those components perfectly? Those factors and more were considered by Complex over a drawn-out process involving constant debate, strategically-deployed rhetoric, diplomacy, and fist-throwing that went all the way to the top. Ultimately, we drew up a perfect formula to determine an unassailable list of the best rap beats ever, full stop. When dealing with 30-plus years of music, a hundred slots fill quickly. As a result, a lot of classics were cut, and some of rap’s best producers may not be fully represented. Them’s the breaks. Ultimately, though, every production on this list is irrefutably essential to the advancement of the genre we hold so dear. They’ve inspired, they’ve influenced, and they’ve been the impetus for a million neck-breaking nods. Without further ado, Complex presents: The 100 Greatest Hip-Hop Beats of All Time.