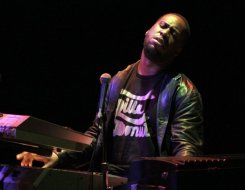 “Any jazz lovers out there?” keyboardist Robert Glasper asked the crowd at UCLA’s Royce Hall Thursday night, which prompted an eruption of applause. “We’re going to play a little something for ya’ll,” he continued, dipping his voice into the mock-serious rumble of a late night lounge act. Glasper false-started a few recognizable jazz standards as he aggressively nodded at his band, the Experiment, which seemed reluctant to join as the crowd clapped with recognition. He then settled on the treacly melody of Cyndi Lauper‘s “Time After Time,” which was greeted with cheers and a joyful singalong before Glasper moved on. Glasper has a bit of an improv comic in him, and this bit has become a fixture during this cross-country tour, which heads to Europe next month. But something about its appearance on this night seemed particularly apt. The same morning, an otherwise positive book review for Ted Gioia’s “The Jazz Standards” in the Atlantic outraged the jazz Twitterverse by running under the puzzling headline “The End of Jazz” and closing with a declaration that jazz, like its songbook, was a “relic.” As Glasper surely knows, Miles Davis raised eyebrows for covering Lauper in the ’80s, and the pianist’s inclusion of the song here underscored Glasper’s thinking on his latest album, “Black Radio,” which similarly incorporates his favorite elements of pop music with nods to hip-hop, funk and soul with a variety of vocal guests.